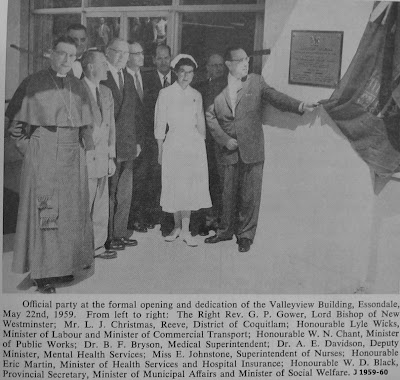 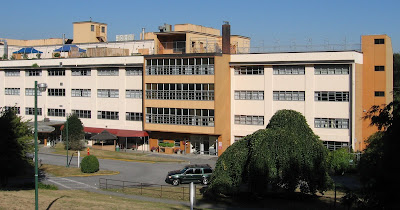 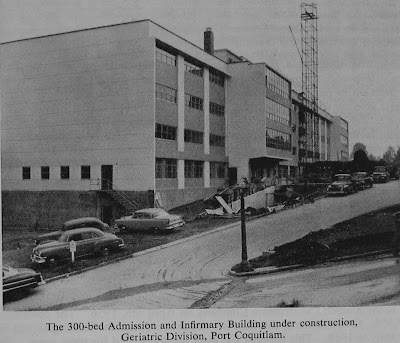 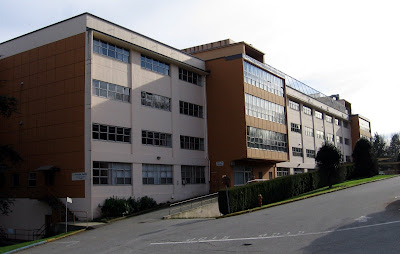 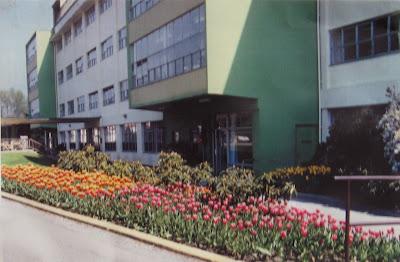 This building was always dedicated to the senior population; and through the years various students studied and created numerous reports, usually as part of their social science degrees.
From custodial care to rehabilitation : the changing philosophy at Valleyview Hospital

Posted by niftyniall at 5:44 PM

Unit 8: Is not used for Hospital use anymore. But the Police and Fire departments, use it for honing their skills.


( from the 1959-60 annual report)
The past twelve months have been eventful ones at this unit of the Geriatric Division, with major advances in services and provision of staff and facilities for the care of the many elderly men and women at Valleyview.

These welcome changes include the opening and occupation of the Valleyview Building, the expansion in staff, particularly nursing, and the reorganization of the general administration of the unit as an independent hospital within the Mental Health Services.

The most outstanding event was the official opening of the Valleyview Building and auditorium by the Honourable Wesley Black, Provincial Secretary, on May 22nd, 1960. The impressive ceremonies were conducted by the Honourable Eric Martin, Minister of Health Services and Hospital Insurance, and were followed by an " open house," during which many distinguished visitors and a large number of the interested public toured the new buildings and viewed the new services and wards, which have been gradually placed into operation during the year.

The new diagnostic and treatment services thus provided have greatly enhanced the nursing and medical care for the patients in this area, as well as providing relief to the overtaxed departments at the Crease Clinic and Provincial Mental Hospital, which have previously provided these services to the patients at Valleyview Hospital.

The six new wards, with 328 new beds, have been gradually occupied as new nursing staff became available, making it possible to increase the total accommodation for aged patients, as well as providing an opportunity to remove patients from two of the older buildings which were severely overcrowded and in need of renovation.
At the end of the year all departments in the new building, except the dental area, were in full operation, and the four infirmaries were occupied by patients transferred from the old infirmaries and with new patients from the community. Opened for business on September 15, 1959.

This policy of unitization of the Port Coquitlam unit has progressed during the year. The name given to the new building was officially accepted as the most appropriate name for this area on January 1st, 1960, when the Home for the Aged Act was removed from the Statutes.


In 2007, this building was being rapidly downsized.

Homes for the Aged

Not the kindest phrase to use to describe the care given to senior citizens, but that is what they used, The Homes for the Aged, Port Coquitlam, is what the official description was. Even though it is not in Port Coquitlam, but the main area post office was.
Homes for Aged, was a phrase used from 1936 until 1960, when they renamed the department as Valleyview, Essondale; Dellview at Vernon; and Skeenaview at Terrace.